Much Ado About Vaping 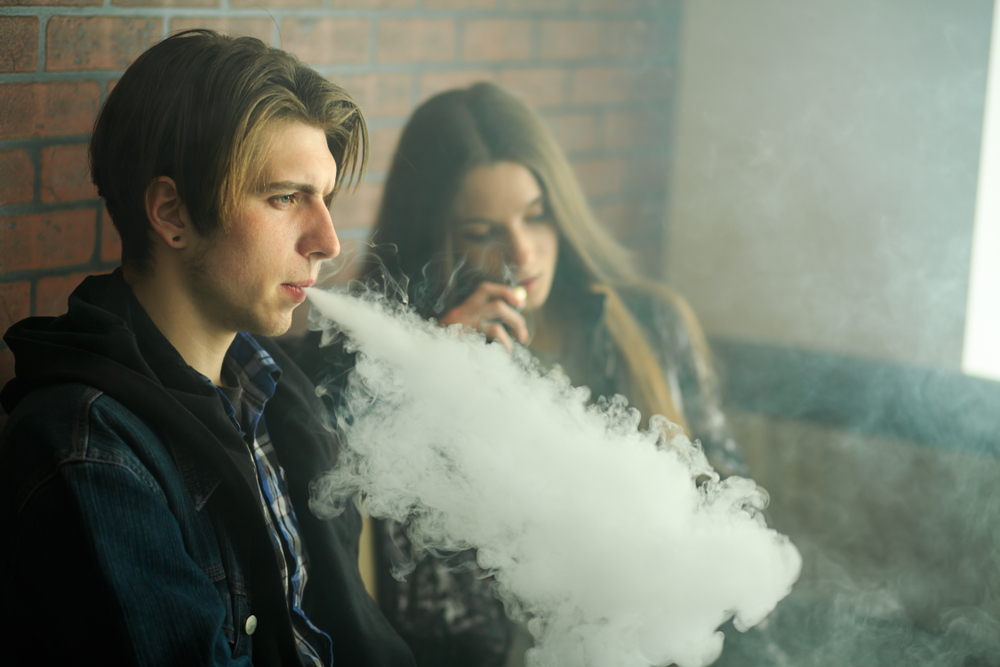 Much Ado About Vaping
Over the past few years, vaping has become the trendy new thing to do. From teens using it in school to adults using it as a way to stop smoking regular cigarettes, vapes went from obscurity to ubiquity. However, though they may seem innocent on the surface, vaping products can still cause severe negative health effects.

Safer Alternative or Faux Reassurance?
Many people believe that e-cigarettes, or vapes, are a “safe” (or at least a “safer”) alternative to the combustion of tobacco cigarettes. While this is true in some ways, recent studies show that vaping is still extremely harmful.

Perhaps the most misleading thing about vapes is that users think they are only inhaling water vapor as compared to the thousands of toxic chemicals found in cigarettes. Unfortunately, that isn’t the case. E-cigarette vapor contains some pretty nasty substances of its own. Vape juice contains everything from artificial flavorings to chemical additives and synthetic solvents. These compounds can still cause irritation and damage to the sensitive tissue of the lungs and blood vessels.

One study found that participants between the age of 18 and 35 had significantly reduced blood flow through their femoral artery after taking just 16 three-second hits on an e-cigarette. This is just one of many studies showing that the chemicals found in vapes can be extremely dangerous. To make matters worse, there is practically no oversight as to what manufacturers are allowed to put into their formulas.

With all this being said, if the only option was to inhale cigarette smoke or use a vape, the e-cigarette is a cleaner option. Even so, it is still far from healthy.

No Long-Term Research
Since cigarettes have been around for decades, researchers have had plenty of time to establish a body of research saying that they are bad for your health. On the contrary, vaping has only become a major phenomenon this decade. Therefore, very little research about the long-term effects of vaping on the human body has been gathered.

Though many people don’t consider the long-term effects, it is worth pointing out that in the 1920s and ‘30s doctors actually promoted smoking. If they had known that cigarettes cause lung and throat cancer and are one of most deadly problems facing the world today, they would have never done so. Vaping is in a similar situation right now. Just because it may seem like a better option doesn’t mean it’s safer in the long run. Fortunately, doctors have learned not to make such hefty claims without first understanding something in-depth.

Mysteries of the Unknown
With vaping becoming more and more popular, some of the negative consequences that come with it are starting to show up. For example, e-cigarette users in Colorado, Wisconsin, and Illinois are falling ill with a mysterious lung disease that doctors are currently attributing to vaping.

Patients are reporting symptoms ranging from shortness of breath to chest pain and coughing to nausea. All of the patients were tested for infections but none of the results came back positive. However, what linked them all together was the fact that they were using a vape prior to falling ill. The mystery lung disease has even claimed the life of one man as doctors struggle to figure out how vaping may be causing it.

Some experts fear that this won’t be an isolated incident if the e-cigarette trend continues to grow.

A Truly Better Alternative
Ultimately, there is only one good alternative to smoking cigarettes: not smoking anything. Though it can be very difficult to escape from a nicotine addiction, many people are able to lead happy, healthier lives by ceasing their smoking habit. Though switching to an e-cigarette might seem like a great option, it is still very bad for your health.

Instead, smokers should make it their goal to quit either with counseling services, group support, or a safer, FDA-approved tool like nicotine patches. Regardless, choosing to avoid both cigarettes and vaping will help you save money and your health. The fresh air all around us that we were intended to breathe is free and should be the only thing going into your lungs.